Summary of the Earth Charter Strategy

From a recent Town Board Meeting: 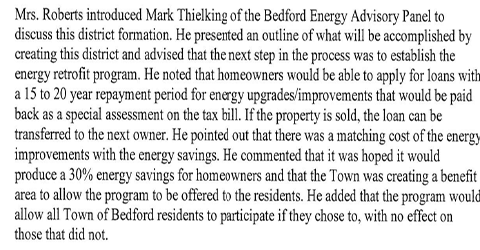 In the U.K., Phil Jones, Director of the CRU and author of some of the emails, is resigning pending an investigation. The Washington Post says, “A scientist who is one of the central figures in the controversy over hacked e-mails from the University of East Anglia’s Climate Research Unit announced Tuesday that he is stepping down while the university investigates the incident.”

In the U.S., Michael Mann, a Penn State Professor involved, will be investigated by Penn State University. U.S.. News and World Report says, ” Penn State officials, who will not discuss the matter, are investigating the controversy. If anything requires further inspection, the school will handle it, a spokesman tells the Daily Collegian. A panel will read every E-mail leaked and determine if climate change critics have any ground for their accusations, the report says.

The Science and Public Policy Institute disagrees with man made global warming theory. Here is their 43 page report on Climategate. It is called Caught Green-Handed.

The Science and Public Policy Institute also has a detailed report on the P.R.. process that led to this situation called, called, “Climate Science Corrupted, How the IPCC’s sponsor, the UNEP, and key IPCC individuals have misled Governments into supporting the notion of manmade warming.”

The key thing relevant to Bedford is that part of the modus operandi is to recruit strong personalities and leaders of local organizations who then by force of personality and position can sway the entire organization with or without the active support of the actual members of the organization:

“The IPCC rose to prominence because people with clear bias were appointed to key positions where they could influence the development of the entire organization. Bert Bolin, the first chairman of the IPCC, was already heavily committed to the notion of manmade warming…”

“The other key factor for the IPCC was the adoption of the UNEP’s methods oc coercing governments and the general public. Those methods included…(b)…creating models based on partially complete scientific understanding and then citing the output of those models as evidence, (c) the politicisation of science through the implied claim that consensus determines scientific truth, (d) the use of strong personalities and people of influence…”

“Governments are also involved in the nomination of participants in IPCC activities and in the circumstances are hardly likely to nominate anyone who is highly critical of the key hypothesis.” p, 17

Subsequent to Bedford’s initial involvement in carbon reduction several big things have changed which the Climate Action Plan neither acknowledges nor addresses. These changes provide an opportunity for you, should you decide to seize it:

adherents of man-made global warming theory admit that even if their claims are accepted, even an 80% reduction in green house gases will only have a tiny potential impact on global temperature while at the same time, such a reduction could only be accomplished by a hugely expensive and radical change in lifestyle for everybody – think electric trolleys/buses transporting people around Bedford rather than private vehicles because of high taxes on private vehicle usage

Climate Science Corrupted also explains the IPCC’s (hence the BEAPsters’) reliance on the Precautionary Principle, namely, “If there are threats of serious or irreversible environmental damage, lack of full scientific certainty should not be used as a reason for postponing measures to prevent environmental degradation.” This is imprecise and is intended to put the burden of proving a negative on claimed polluters. Notice the burden is to disprove a “threat of damage” as opposed to damage.

One approach you could take on all this is to cite the above changes to the BEAPsters and ask them to apply their own precautionary principle to themselves. That’s what I intend to do at some point. Ask them to defend their positions about consensus and truth of man-made global warming on the basis of avoiding threat of damage to Bedford’s economic and social fabric. Basically by handing the three of you a climate action plan that ducks all the hard questions, they are putting you in the position of fighting their unreasonable, illogical, blinders-on, one-sided, emperor with no clothes battle for them. Why social fabric? Because there is opposition among voters about man-made global warming. And once people understand that all residents and their lifestyles are the ultimate target of the BEAPsters, opposition should increase. And if the Climate Action Plan and the 10 or so committees that the Bedford Sustainability Coalition wants to have are adopted, then the social fabric of the town will be rent by, on the one side, people trying to regulate everything inside of their neighbors’ houses, and those who will resist that effort. I can see it now, boards of local churches debating climate change issues in connection with the kitchens in their fellowship halls. That sort of thing will just foster social conflict and divisiveness.

The UN group leading the man-made (anthropogenic) global warming (“AGW”) charge is the IPCC. IPCC Chair, Rajendra Pachauri, just said, “we have reached the point where consumption and people’s desire to consume has grown out of proportion…our lifestyles are unsustainable.” Translation? The AGW Movement’s ultimate goal is government regulation of our lives for carbon reduction. One example per Pachauri? “…use pricing to regulate the use of private vehicles.” Pachauri wants government to tax Bedford residents every time they drive. That’s car rationing.

Pachauri thinks long-term. His agents for carbon political change include kids. “I think the section of society that will make it happen is essentially young people…they will be far more sensitive than adults, who have been corrupted by the ways we have been following for years now.” I don’t think that Bedford adults agree that they and their lifestyles are corrupt or think their kids should be told that.

You should also be aware that ICLEI, the organization Bedford has joined thanks to the BEAPsters is an instrument for the promotion at local levels of Agenda 21 and the Earth Charter, both of which reflect the far left environmental and social justice agendas of the United Nations. I would bet that prior to Bedford’s joining this organization, no one did full due diligence on these organizations, or, if they did, no one told the three of you about what the due diligence revealed prior to your joining. You should also be aware that Andy Spano, tax and spend Democrat extraordinaire, is on the board of directors of ICLEI US and thus will continue to haunt Westchester County through the environmental backdoor.

On this page, learn about the book written by ICLEI, call the Local Agenda 21 Planning Guide, “an introductory guide on the planning elements, methods, and tools being used by local governments to implement Agenda 21 at the community level.”
http://www.idrc.ca/en/ev-9322-201-1-DO_TOPIC.html

Agenda 21 in a nutshell? The UN’s website says, “Agenda 21 is a comprehensive plan of action to be taken globally, nationally and locally by organizations of the United Nations System, Governments, and Major Groups in every area in which human impacts on the environment.”
http://www.un.org/esa/dsd/agenda21/

But Agenda 21 is much more than an environmental program. It’s a blueprint for a a far left political system – economic and social justice and all that entails. By joining ICLEI, Bedford has essentially joined the United Nations, adopted a foreign policy, and endorsed a system of global governance and legal regulation that would take priority over United States law. When you read that, you will probably dismiss that Robinson-alarmism. But don’t believe me. Do your own research. Prove to me that I am wrong.

I don’t think that Bedford voters will be enthusiastic about Bedford’s membership in ICLEI once its full agenda and real purpose is publicized.

If none of you really understood what ICLEI is all about, then ICLEI has succeeded. That is part of their modus operandi. “The critical point of behavior control, in effect, is sneaking up on mankind without his self-conscious realization that a crisis is at hand. Man will not even know that it is about to happen.” All of the above is scratching the surface. Here are two articles that will give you the idea of what Bedford has, hopefully inadvertently, gotten involved in. I don’t agree with everything in these two, but they give you an idea of what it is you are dealing with.

All of the above is just scratching the surface. There is much more about all of this that Bedford residents can learn about. And all this information is easily accessible and obvious, if people just take the time to look and consider what it means. I am confident the they didn’t investigate it for you the way an impartial, open-minded, fact-finding committee would have.

The Katonah minority | Katonah | 3 years ago

Well, well, well. Some of us in Katonah were called all kinds of names for correctly analyzing court documents and taking the word of aRead more

How sad that our standards for Bedford public servants have sunk so low as to allow someone like Ms. Carr, who is so lacking inRead more

You Ms. Carr are a list and a thief and should be in jail right nowRead more

This is truly disgusting and I am glad to know this before Election Day. I wish someone else would run for Town Supervisor.Read more